Some of the links below are affiliate links, which means that if you choose to make a purchase, I will earn a commission, which comes at no additional cost to you. To learn more, please read our Legal Disclaimer and Privacy Policy. 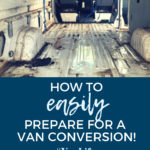 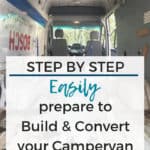 Don’t judge a book, or a Sprinter Van, by her cover!

First things first, take a deep breath.  You’ve done step one, and purchased the Sprinter Van.  Now, don’t worry – you’ll get through this next step little by little with some help from Van Adieu!

Preparing a Sprinter Van to become your tiny home, your camper conversion, or just your getaway vehicle for awesome adventures, is one of the most important (and overwhelming) things you can do in the process of converting your Sprinter Van.  This is where the proverbial rubber hits the road (if you don’t mind the pun), and the reality is starting to sink in.  You have purchased a Sprinter Van, and it looks rough. You need to do a lot of work to get it to look like those #vanlife Instagram photos! 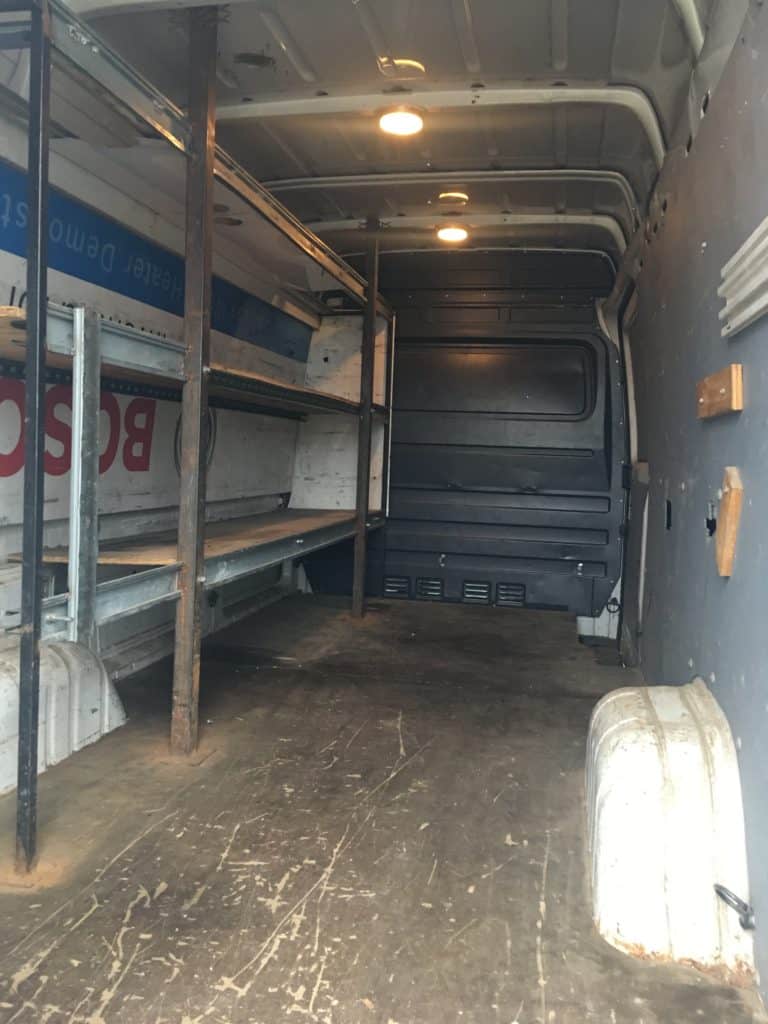 Preparing a Sprinter Van for Conversion

Steps to Preparing a Sprinter Van for Camper Conversion

1. Go to a Mechanic – Do Not Pass Go, Head for a Mechanic Immediately

Hopefully, you did this BEFORE you purchased your Sprinter Van, but if you didn’t or even if you just want to get a second opinion, I highly suggest going to a mechanic that is well versed in Sprinter Vans to get an opinion.  This could save you a lot of time and money in the long-run.  Remember to ALWAYS look for Black Death – it’s one of the top reasons Sprinter Vans have issues! 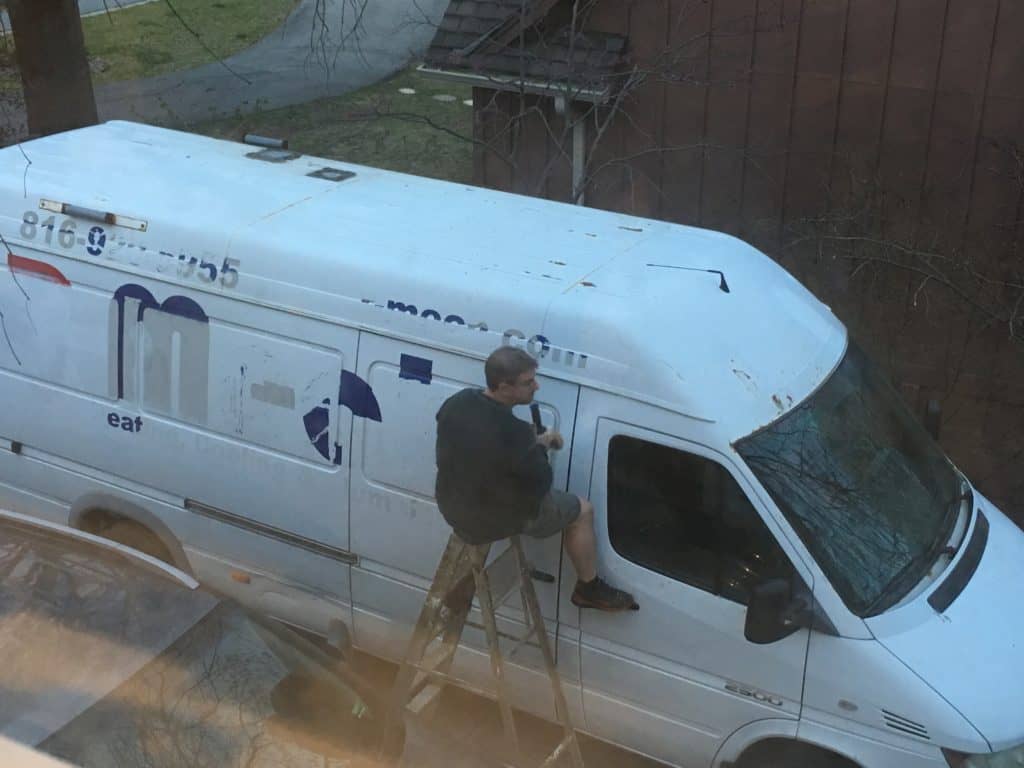 2. Remove All the Vinyl Lettering from the Outside of the Sprinter Van and Clean Up the Exterior

Unless you have purchased a newer Sprinter Van or one that has never been used commercially, there is a likelihood that you will have to clean up the exterior of your Sprinter Van.  Don’t know where to start?  We’ve got you covered, with an article and video on how to easily do this!

Psst.  Here’s the secret!  Its the MBX Vinyl Zapper tool! 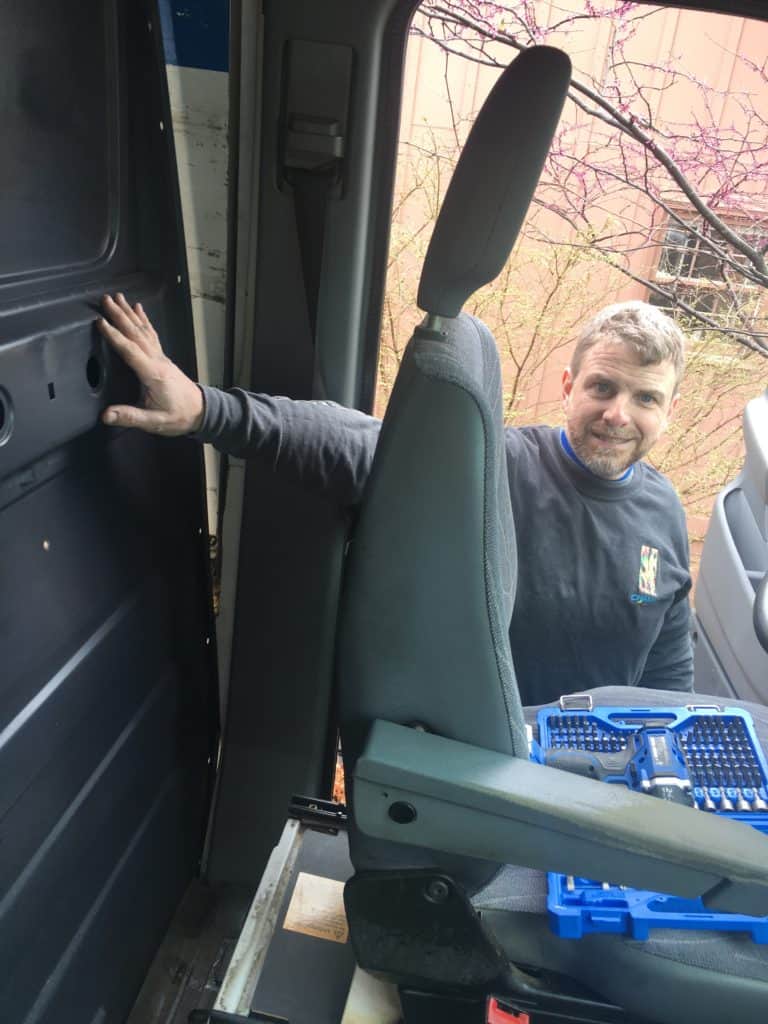 3.  Remove All Shelving/Interior Parts, Including the Bulkhead

This may go without saying, but you have to remove the interior shelving and interior parts such as the wall between the driver and passenger seats (bulkhead) and the rest of the Sprinter Van.  Also, you will have to remove the shelving, if there is any inside the Sprinter Van.  Tip:  Try to sell that shelving!  Many people are looking for it, or even the divider between the driver/passenger area and the rest of the van.  Make some money! 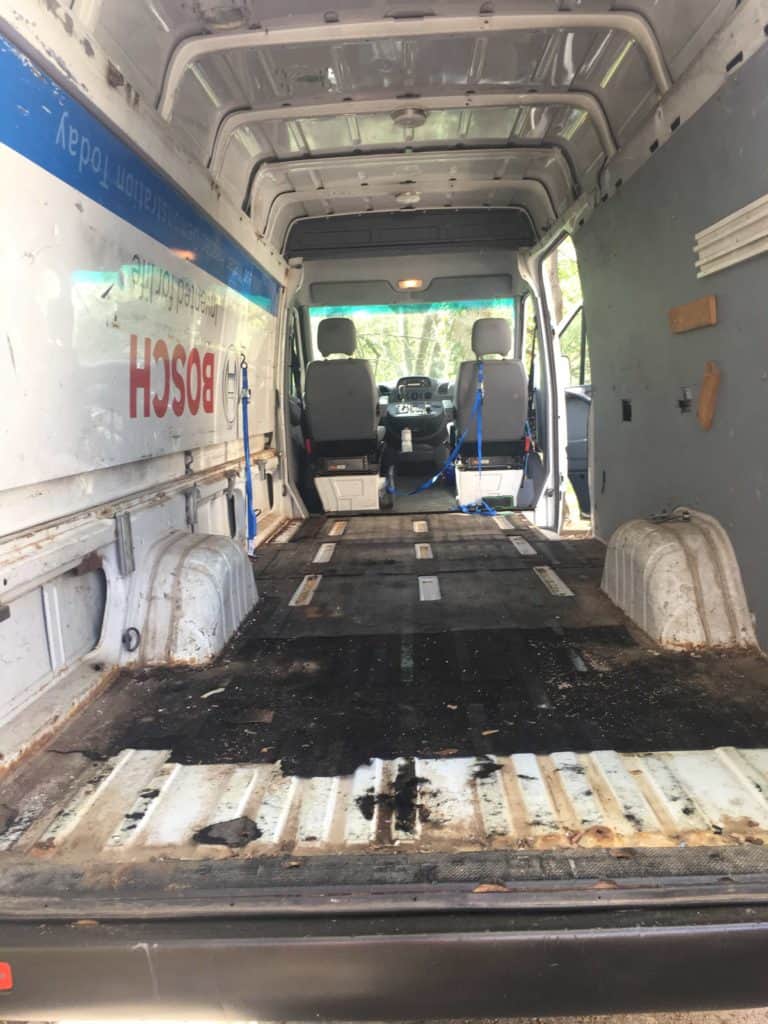 Removing these items won’t be easy.  I’m not going to lie, this was definitely a Todd job.  But it was so important so that we could move forward to our journey of creating our interior!

This is an important step as well.  Underneath any flooring can lurk huge issues, including rust (even if it looks really, really nice and you are tempted to not remove it).  My suggestion is to absolutely remove the flooring from the Sprinter Van and get down to metal.  Then, you truly know what you are dealing with! 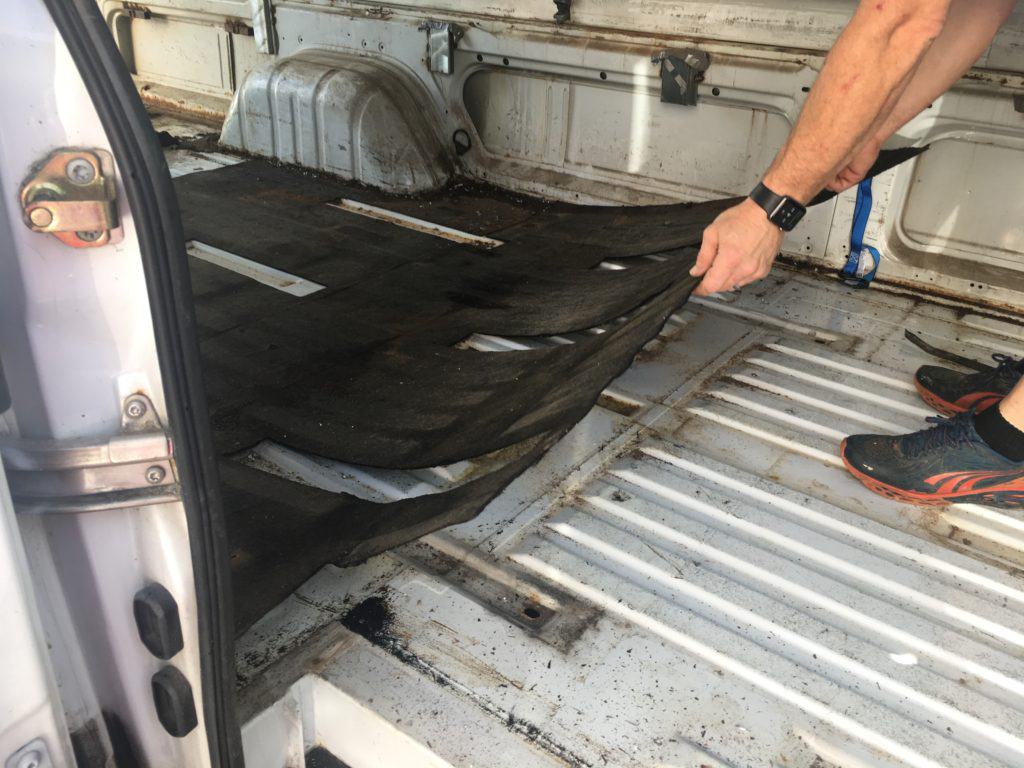 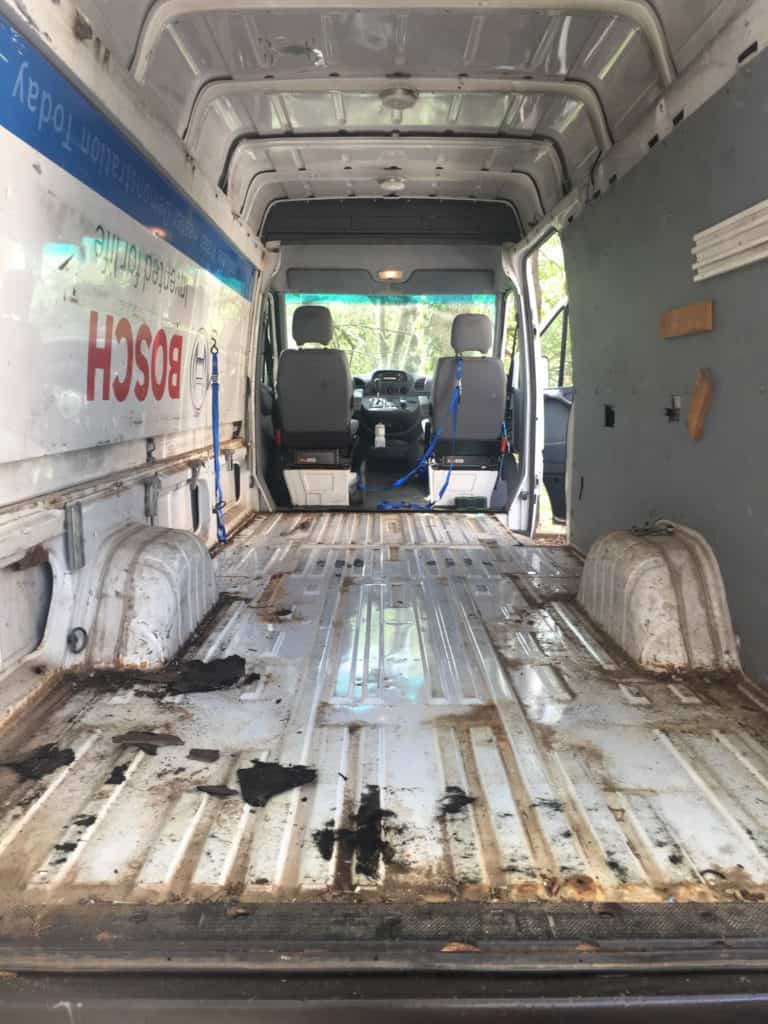 Need help figuring out how to remove rust from a van?  No worries!  Here’s the answer!  You need to a find an angle grinder and wire brush attachment!  This tool allows you to grind off all surface rust from inside your van!  In fairness, we also used a Polycarbide Abrasive Wheel to help things along!

MLC Preparing a Sprinter Van for the road!

At this point, you need to sweep up all the dirt, debris and dust from that floor!  Shopvac’s are amazing, but any good broom will do!

And don’t forget the soap and water!  Take your time, really give this Sprinter van a good scrub!

First apply rust converter to any areas that have a great deal of rust that you simply can’t get off.  According to their information, the  VHT SP229 Rust Convertor is a unique product designed to spray directly on rusted areas and stop rust from continuing. It sprays on clear and turns to a black metal protecting coating to prevent future rust from forming. Specifically formulated for application over metal, body filler, or fiberglass. Rust convertor sands to a smooth, even finish. Allow 24 hours to dry completely before applying top coat. Complete application instructions and curing information also printed on each can.

Then, you want to apply primer to the entire interior of the van, and if you desire after that – paint!   Definitely do not forget or skip the step of applying primer.  It is really important to seal everything up and prevent rust! 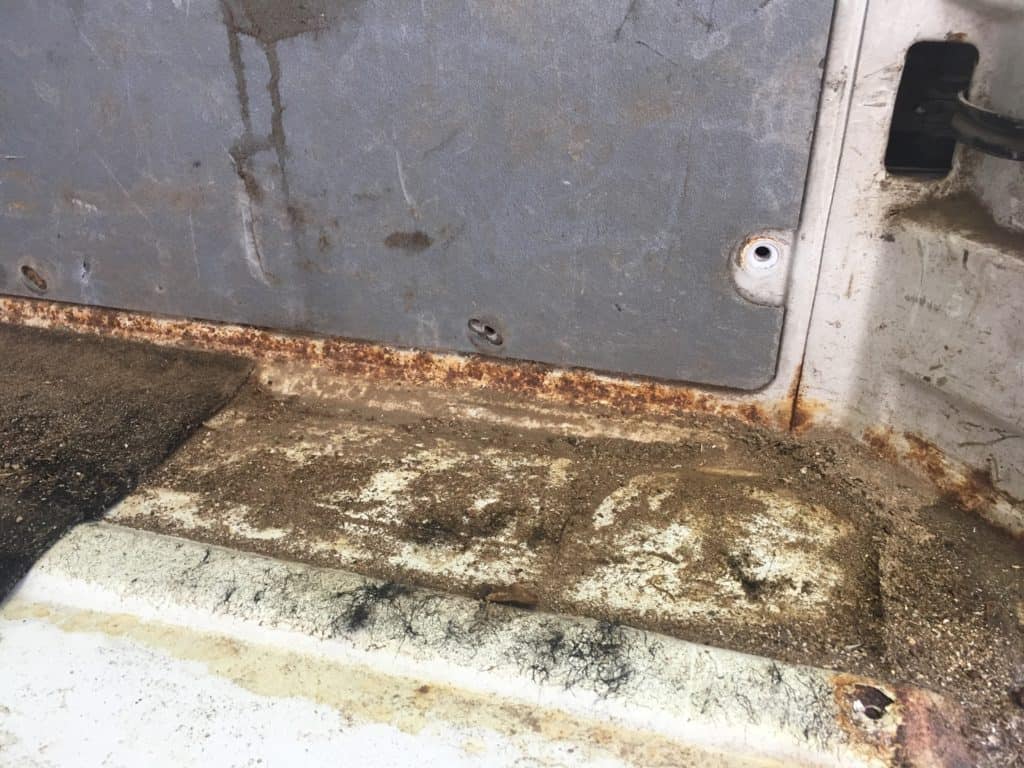 TAKE A DEEP BREATH AND PAT YOURSELF ON THE BACK!  Through your hard work, and preparing a Sprinter Van for a Camper Conversion, you will now have the great blank canvas upon which to build your beautiful Sprinter Van masterpiece! 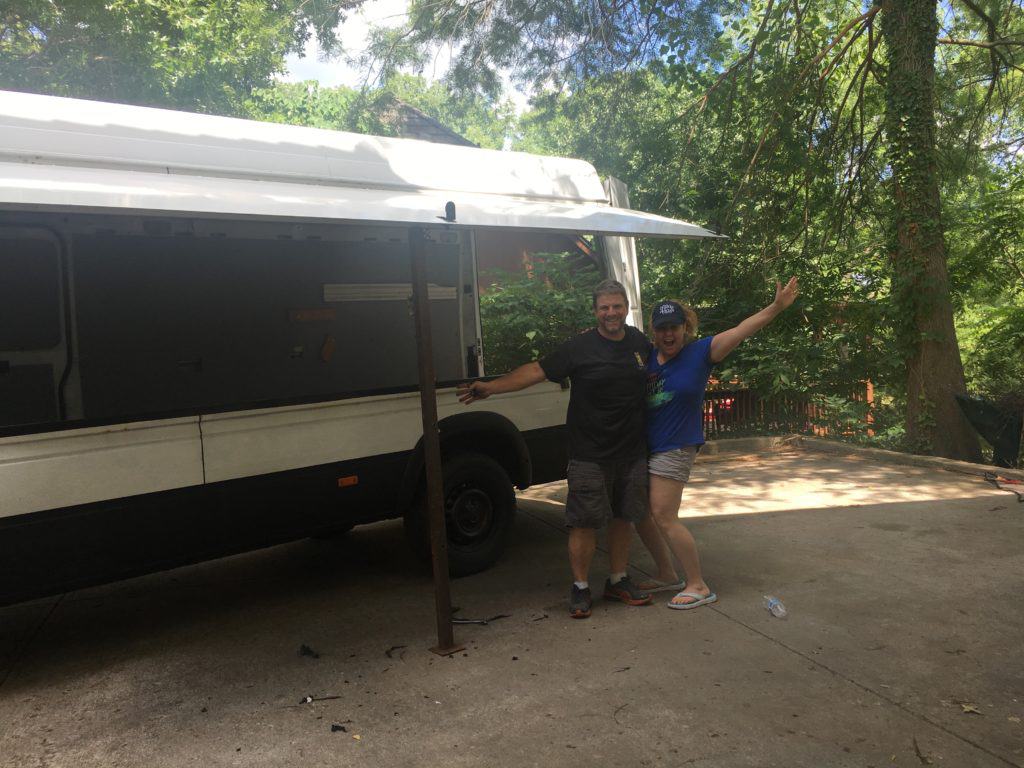 Todd and Annette in front of their awesome Sprinter Van, Van Adieu!

Tell us your story!  How did you do it?  Would you recommend any specific products?  Any specific tricks or tips to make the process of preparing a sprinter van for conversion any easier?  We would love to hear from you!

Join the Adieu Crew to get our weekly Adieu Crew News straight to your email inbox, and also get access to the....

The Vault is full of EXCLUSIVE tutorials, printables, and downloads for van conversion, and outdoor resources & inspiration!

*We promise never to spam you, or sell your information.

« Why You Absolutely Need to Look for a Farmers Market When Traveling
But First, Coffee. [Aeropress Review] »

This site uses Akismet to reduce spam. Learn how your comment data is processed. 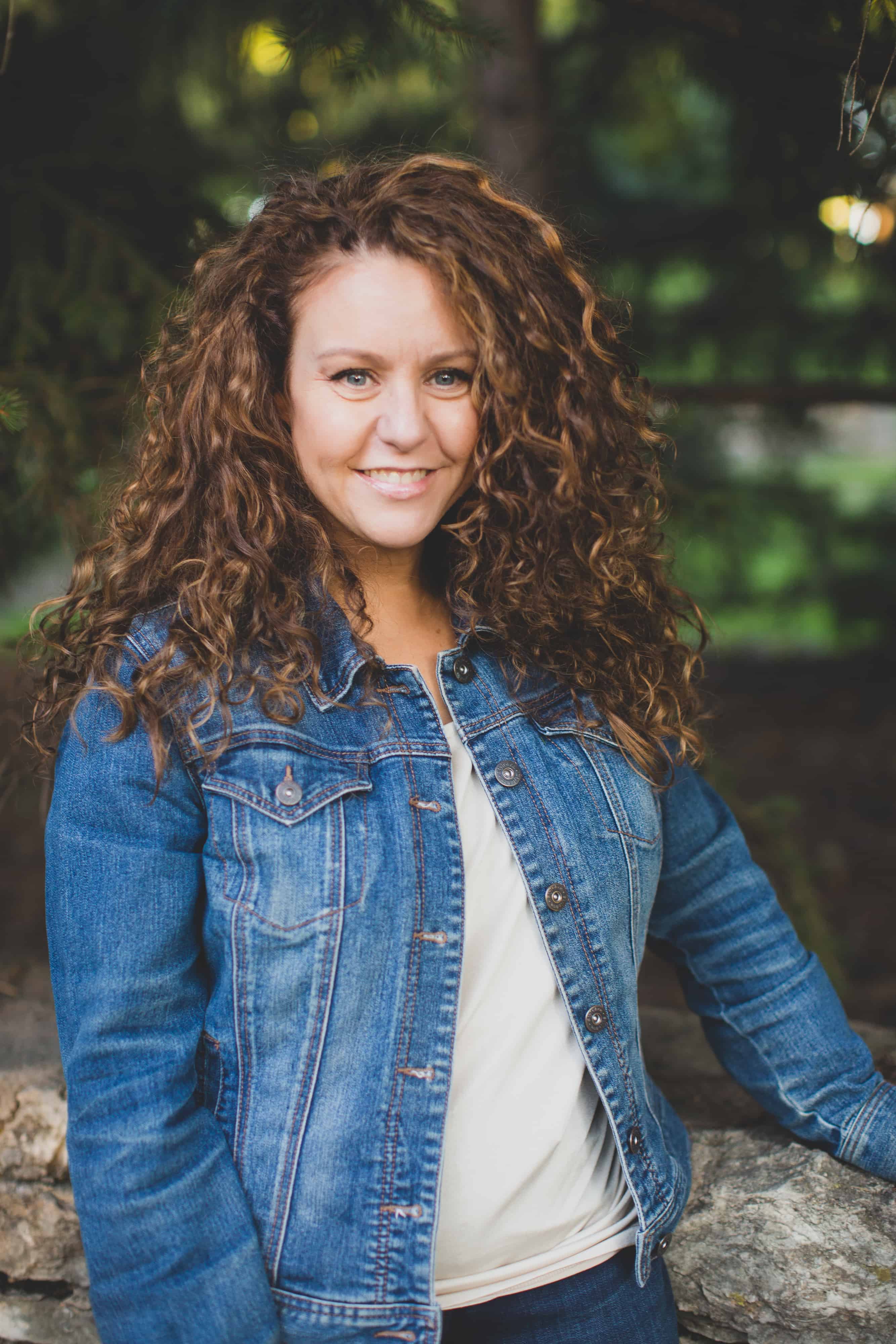 You are all kinds of awesome for joining us here at Van Adieu! I’m Annette, and I provide outdoor resources and inspiration for the amateur adventurer!  Todd is my husband, and is crushing it on our Sprinter Van Conversion Project! You can learn more about us here.  We are so glad you stopped by, because seriously, I’ve always liked you. 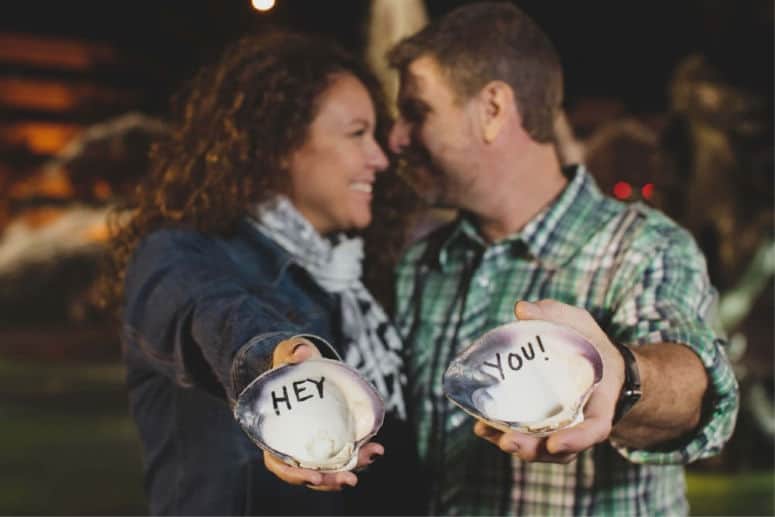 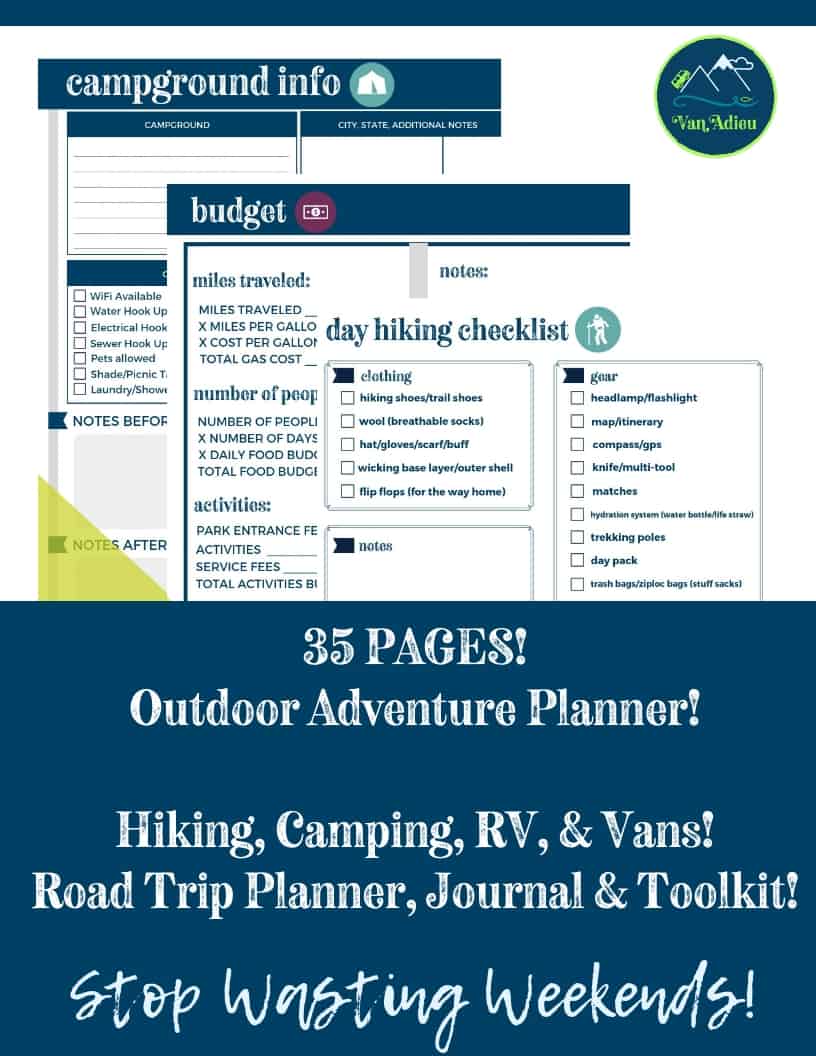 x
We use cookies to ensure that we give you the best experience on our website. If you continue to use this site we will assume that you are happy with it.Ok